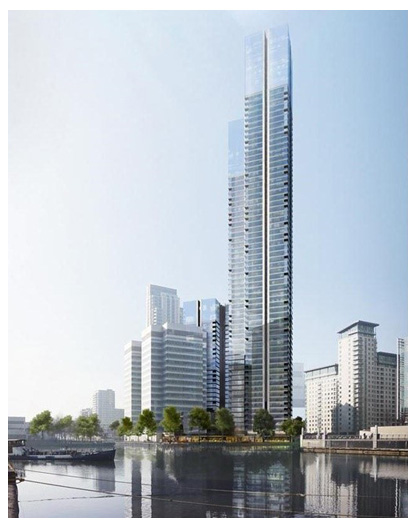 Overlooking the Canary Wharf financial district, South Quay Plaza is the first of three towers in the development, the tallest of which will reach a height of 220 meters and have 68 floors. South Quay Plaza will provide a total of over 1,200 new homes and 2.6 acres of landscaped gardens. It will also include retail, café, and restaurant space. The development will involve the demolition of existing buildings on the site, including a 1980s office block.

"South Quay Plaza is set to become a truly unique urban oasis in the heart of one of London's key business districts. We are proud that our safe, reliable and energy-saving solutions can help make this residential development a thriving example of sustainable high-rise living," says Thomas Hinnerskov, KONE's executive vice president for Central and North Europe.

KONE will deliver six KONE MiniSpace(TM) elevators, two KONE MonoSpace® 700 elevators, and a KONE Destination Control System to the development. To meet the needs of a world-class high-rise development, KONE will equip South Quay tower's elevators with KONE UltraRope® hoisting technology, which will provide unrivalled elevator eco-efficiency, reliability and durability, while also improving elevator performance. South Quay Plaza will become the first high-rise project in Europe to be equipped with KONE UltraRope, which eliminates the disadvantages of the much heavier traditional steel ropes, and enables elevator travel heights of up to 1,000 meters.

"We are very excited to work on this ambitious project, which will become an elegant jewel in London's skyline. KONE's innovative UltraRope technology makes it possible for residential buildings to rise to new heights as cities grow upwards. At the same time, the new, lighter technology leads to lower energy consumption and an improved people flow experience," says Sascha Brozek, head of KONE's Major Projects.

Scheduled for completion in 2022, South Quay Plaza is developed by Berkeley Homes and designed by architect firm Foster + Partners.

The order was booked in the third quarter of 2017.