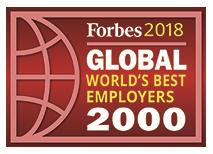 KONE, a global leader in the elevator and escalator industry, has been recognized as one of the best employers in the world by Forbes business magazine for the second year running. KONE ranked 105th on Forbes' 2018 Global 2000: World's Best Employers list.

"We at KONE are extremely proud to feature on Forbes' list of the world's best employers. Being a great place to work has been one of KONE's strategic targets for several years, and this recognition underlines our position as an industry leader," says Susanne Skippari, KONE executive vice president, Human Resources.

"We see diversity and our employees' wellbeing and professional development as business strengths. Our ranking shows that these are values that both our current and potential employees appreciate," she adds.

KONE's personnel strategy includes a strong focus on enabling employees to develop their competencies and leadership skills. All employees are encouraged to create a personal development plan, and are supported in building their knowledge and abilities through extensive global learning programs.

At the end of 2017, KONE employed more than 55,000 people representing 129 nationalities and serving customers in more than 60 countries.

According to Forbes, the employers recognized on the list were endorsed by their own employees and other respondents in particular in the areas of image, working conditions and diversity.

The 2018 World's Best Employers list is based on an analysis of more than 430,000 global recommendations. Employees rated their own employer and their likelihood of recommending their employer to a friend or family member. Respondents were also asked to recommend other companies they admired as employers. This list is based on Forbes' 2018 Global 2000 rankings, which included publicly traded companies from 60 countries.